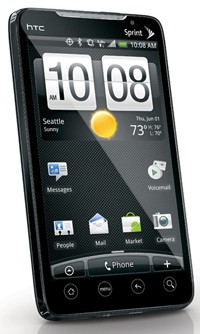 In the world of mobile devices, the iPhone is generally assumed to be king of the hill. However just this year fierce competitors have been springing up like wildfire. One of these competitive companies is HTC, with their newest release called the Evo 4g. Let’s take a look into some of the main selling points of the device compared to the iPhone, and truly decide which comes out victorious .

The first design spec I would like to cover is the screen. The HTC Evo sports a 4.3 inch screen with a 480 by 800 resolution, with 384 as the pixel count. While lacking the exact quality and clarity of the iPhone 4’s “Retina” display, the Evo definitely  comes on top when compared to any other model. We give this round to the iPhone 4, as the comparison is in quality, not size. Know however that the Evo’s screen is larger.

The next topic would be storage. The base model Evo at $199.99, is outfitted with an 8gb card, which can be upgraded to 32 for $200.00. In comparison, the iPhone 4 base model at $199.99 as well comes standard with a 16gb card. While storage capacity is often the users choice, price is not. However, the iPhone 4 is not capable of having storage upgraded later, so we call this a draw as well.

The next topic would be browsing capability. The Evo comes standard with wifi capability as does the iPhone 4, but the Evo now supports 4g networks as the iPhone 4 does not. Another upper hand the Evo has over the iPhone 4 is the ability to be used as a wifi hotspot for up to 8 devices. We give this round to the Evo with no hesitation.

The last topic would be cameras. The Evo has an 8 megapixel led flash camera on the back, paired with a 1.3 megapixel frontal camera, also with led flash. The primary camera is capable of shooting 720p, as is the iPhone 4’s. The iPhone  has a 5 megapixel primary camera, which when tested had more visible clarity when shooting video, but not so much for the still shots. The Evo had stunning still shots, but lesser quality video. Because of sheer specs, we give this round to the Evo.

HTC’s lineup is definitely comparable to apples iPhone lineup, however like everything else on this world, they have flaws. While features and user ability surpass most competitors, the same cannot be said about hardware and clarity, at least not when compared to the iPhone 4.

Overall, the Evo 4g it the best of its class, winning at 2 to 1 against the iPhone 4 itself. The question of which to buy can be answered with a quick assessment.

If you as a user look for unlimited customization, endless features, top of the notch feature specs and software, the Evo 4g is your phone. If you are looking for unsurpassable clarity, hardware unlike any other design in quality, and an overall easy and useable operating system, we recommend the iPhone.  Like everything else, in the end the decision is the user’s.